What is a timing belt? 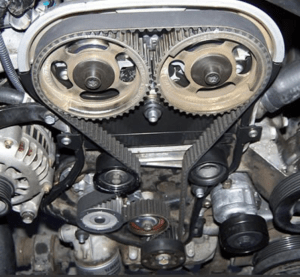 A timing belt is a toothed belt that connects the engine crankshaft to or camshafts, as you can see in the pictures on this page.

How does the timing belt work?

A timing belt is a toothed belt that connects the engine crankshaft to the camshaft or camshafts as you can see in the picture to the right.

In some engines a timing belt can also drive additional components such as a water pump, balance shaft, an intermediate shaft and an injection pump must also be synchronised with a crankshaft.

When a timing belt is replaced, it’s very important to set the timing properly. Before a new timing belt is installed, the crankshaft, the camshaft and other components synchronised with a crankshaft must be aligned in a certain way. Improperly set timing will cause a variety of problems such as lack of power, vibration, misfiring, etc.

When a timing belt must be replaced? 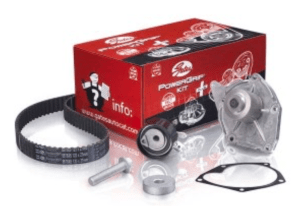 What happens if the timing belt breaks?

If a timing bel 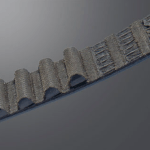 t breaks, the engine will no longer work. If a timing belt breaks while driving in an interference engine, the camshaft stops turning leaving some of the engine valves in the open position. The heavier crankshaft will continue to rotate by inertia moving pistons up and down. This will cause the pistons to strike the valves that left open. This may result in a heavy damage to the engine with broken or bent valves, damaged pistons and, possible, destroyed cylinder head and block. The damage will be less extensive in a non-interference engine but in either case, the engine will stall, leaving you stranded.